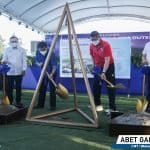 President Rodrigo Duterte on Friday led the groundbreaking of the Philippine Sports Training Center (PSTC) in Bataan. The Bataan LGU donated 25 hectares site of the training center in Bagac.

The modern center will house 39 sports facilities for aquatics, athletics, gymnastics, weightlifting, and taekwondo, among others, according to the Philippine Sports Commission.

Duterte said the project will have a huge impact on the future of the national athletes and the young generation as well. The President also said more world-class athletes will be raised and developed to represent the country in international competitions.

PSC Chairman Butch Ramirez said he has been wanting an advanced national sports training facility for a long time, and the creation of the PSTC is very timely.

Meanwhie, Bataan Governor Albert Garcia took the opportunity to express his gratitude to President Duterte for choosing Bataan in hosting the said facility.

The governor said it will help Filipino athletes to be more competitive and achieve more medals in competing in international games and the Olympics. He also said that since the site of PSTC is near the Mt. Samat Shrine, the heroism and valor of our heroes will inspire Filipino athletes. RA 11214, signed February 2019, mandated the establishment of a sports complex which will be the primary venue for the development and training of national athletes.