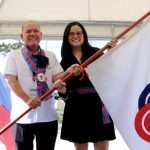 Atty. Wilma T. Eisma handed over her position as chairman and administrator of the Subic Bay Metropolitan Authority (SBMA) in a formal turnover ceremony on Monday (March 7) in front of the agency’s administration building, formally signaling the start of former Olongapo Mayor Rolen Paulino Sr.’s leadership.

Paulino, who became mayor of Olongapo City, also served as one of the volunteers of the SBMA during the transition of the Subic Bay Freeport Zone (SBFZ) from being a United States Naval Base.

During his acceptance speech as chairman and administrator, Paulino said that his first priority is the beautification of the Subic Bay Freeport, now that most parts of the country are placed under Alert Level 1, particularly citing that he intends to make the area “greener” by planting more flora in tourism spots.

The new chief cited that he also wants to drum up the sports tourism scene of the SBFZ since the area is conducive to become the sports mecca of the country, while making the Freeport more appealing and investor-friendly.

On the matter of the employees of the agency, he said that former chairman Eisma has left him to their care, citing that he could not accomplish his task as chairman without their help. “I can’t do this alone, so I need each and everyone’s help,” he said.

He also urged the help of businessmen, locators, directors, stakeholders, and especially those in the ground to help him do what needs to be done to accomplish the mandate entrusted to him by President Duterte.

Meanwhile, former chairman Eisma said, “This job is not for the faint-hearted, and it really takes a village. I know Kuya Rolen (Paulino) has the chops to make it, but with your help, he can do so much more.” She added that the new chairman’s success is the success of every employee of the SBMA.

“It is in the best interest of the Freeport community (not in your best interest) that Kuya Rolen succeeds, and he cannot do that without all of you,” she said, citing that regardless of who the chairman is, the love for Subic Freeport should always prevail.

President Duterte appointed Paulino to the top post on March 1 in Malacañan Palace, where Executive Secretary Salvador Medialdea swore him in. Paulino said that the President appointed him as chairman and administrator of the SBMA for six years.

The appointment of Paulino came after the president accommodated the resignation of Eisma due to health reasons. President Duterte reappointed Eisma as a director of the Development Bank of the Philippines (DBP) on March 1.

The post Eisma turns over SBMA reins to Paulino appeared first on 1Bataan.