‘Euphoric’ moments at The Bunker 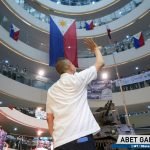 ‘Euphoric’ moments at The Bunker

A mixed feeling of euphoria and sadness pervades at the Bunker as Bataan Gov. Abet Garcia prepares himself for a new journey– this time to the House of Representatives after being elected congressman of the Province’s Second District.

Addressing a crowd of mostly provincial capitol employees, the governor seemed to hold back tears as he expressed gratitude to everyone — from job order employees to all the people behind the success of all government endeavors that made the provincial government what it is now.

He thanked the Sangguniang Panlalawigan under the leadership of Vice Gov. Cris Garcia for coming up with a resolution citing his various accomplishments as the province’s chief executive for nine years.

The governor appreciated the audio-visual presentation prepared by the Provincial Information Office (PIO) which had been churning out important and valuables stories about Bataan.

From out of the blue sprung a lady by the name of Aliw Z. Diwa of the Provincial Cooperative and Enterprise Development Office (PCEDO), who blurted out a hastily prepared “tula” praising the achievements of the governor. “Salamat, salamat sa inyong suporta,” Gov. Abet told the crowd. He asked everyone to also support incoming Bataan Governor Joet Garcia.

The governor appeared overwhelmed with good vibes, happiness and sense of fulfillment having served his fellow Bataeños for nine years.

The post ‘Euphoric’ moments at The Bunker appeared first on 1Bataan.