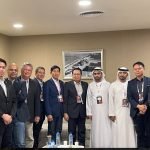 The Freeport Area of Bataan (FAB) moves another step closer to its goal of becoming an offshore financial center that embraces emerging fintech markets since the passing of Republic Act No. 11659 or “An Act Amending Commonwealth Act No. 146 otherwise known as the Public Service Act” paves the way for the liberalization of foreign ownership over utilities to operate in the Philippines.

Having the capacity to license, register, supervise, and approve local and foreign business entities engaged in pioneering industries such as artificial intelligence/technology, blockchain, business process outsourcing (BPO), cyber security, distributed ledger technology, financial technology solutions, internet of things, virtual reality, and smart cities initiatives in the Freeport Area of Bataan (FAB), the AFAB Board of Directors passed a Resolution that authorizes AFAB Administrator Emmanuel D. Pineda to engage in negotiation with SpaceX/Starlink to operate a satellite-based internet system in the ecozone.

Such a move stems from the aim of the AFAB to host a broadband internet system that would benefit the freeport locators’ processes and operations, connectivity, and other telecommunications-related activities. Furthermore, the AFAB looks forward to other benefits that improved high-speed broadband services that Starlink may provide to the FAB and in other communities. In fact, the Authority has been closely monitoring developments in this area since February 2022. Now that the amendment was signed, the AFAB is to proceed aggressively with talks with Starlink.

As of writing time, the AFAB team, led by Administrator Pineda, is joining thousands of innovators, thought-leaders and investors in blockchain, artificial intelligence, quantum technology, big data, and internet of things (IoT) in this year’s SIGMA AIBC AGS Summit in Dubai and has met with His Excellency Adnan Al Noorani, Chairman of the Board of the Private Office of Sheikh Saqer Bin Mohamed Al Qasimi & Group of Companies, and Founder of the Future Innovation Summit and CEO of D1 Technologies and LEO Investments, whose plans align with the long term plan of the AFAB for the next 10 to 30 years.