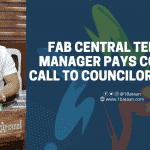 The councilor said, “We talked about the setup of the terminal and the soft opening of the facility”.

They also talked about assuring the convenience, orderliness, and cleanliness of the terminal when it starts its operation.

FAB Central Terminal is a mixed-use development project on a 5.9 hectare-property, birthed by the partnership of Hausland Group and the Authority of Freeport Area of Bataan.

Aside from the terminal facility, a commercial mall will be built and commercial lot spaces will be available.