FAB gets media support in repositioning 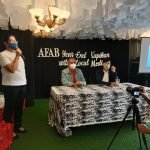 FAB gets media support in repositioning

(If you are a businessman, you are a company…and you are looking for a place for your business…talk to us…come to us, because only ‘we’ (AFAB) can create a zone for them (companies) Technical Officer Salapantan remarked.

Meanwhile, Administrator Pineda highlighted how the AFAB was able to provide an estimated Php90 million worth assistance to 30,000 workers through its FABayanihan Program and partnership with the Offices of Senator Bong Go and Bataan Second District Representative Joet Garcia and the Department of Social Welfare and Development (DSWD).

Furthermore, the Administrator specially mentioned the AFAB Business Continuity Plan (BCP) as a major achievement for the Agency as it led the creation of its Health Unit that helped manage the challenges brought by the COVID-19 pandemic.

Relatedly, the Administrator also discussed how the AFAB’s COVID SAFE Shield Program encourages the FAB Enterprises to further promote safety in the workplace through vaccination and testing, aside from securing the Safety Seal Certification by the Department of Labor and Employment (DOLE).

(We take pride in having this, as…other IPAs do not have this…We challenged the locators to go even beyond the Safety Seal of the DOLE. It’s because, we recognize the percentage of vaccination and the institutionalization of the regular testing as mandated by DOLE.)

With the passage of Republic Act 11453 or “An Act Further Strengthening the Powers and Functions of the Freeport of Bataan” that amended the AFAB’s Charter under RA 9728, the AFAB now has strengthened powers and functions that allows for the establishment of the FAB’s expansion areas.

The post FAB gets media support in repositioning appeared first on 1Bataan.