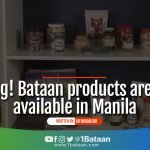 According to Congressman Garcia, it has long been the dream of the Provincial Government of Bataan and Bataeno MSMEs to introduce our local products to consumers outside Bataan, specifically in Metro Manila. Some of the Galing! Bataan products that are popular among tourists are tinapa, tuyo, araro, buko pie, and handicrafts.
Also held during the launching was the signing of a Memorandum of Agreement among the Provincial Government of Bataan, Bataan-Baseco Joint Venture Inc., and the Bataan Chamber of Commerce & Industry Inc.
Also featured in the Galing! Bataan Marketplace is the 1Bataan Information Kiosk installed with the Where App, an online application containing all pertinent information about Bataan. This practically gives people a chance to know our province without physically going to Bataan.
Governor Joet Garcia, together with PCEDO, BBJVI, and other Stakeholders, is hopeful that this initiative will attract more investors, tourists and customers to come to the province and experience Bataan.