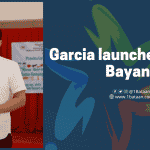 Bataan Gov. Joet Garcia disclosed that the provincial government will launch “Dalaw Bayan” to bring government services closer to the people at grassroots level in the entire province.

“We are presently studying the mechanics and the services we will bring down to each town of the province”, the governor said.

“We will bring down services probably health, education, medical mission, and even free haircut among others. We are still studying the mechanics”, he added.

“We cannot do it per barangay, since we have 237 barangays, we will be lacking time, so what we will do, one town per month. We will cluster barangays in large towns like Dinalupihan”, Garcia explained.

“We will launch the program probably by September”, he said. When he was Balanga City Mayor, Garcia launched a commendable “Dalaw Barangay” program that was adjudged by DILG as one of the best LGU practices and was replicated by other towns.