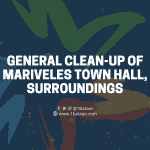 Mayor AJ Concepcion and other newly elected officials led the general clean-up of Mariveles town hall and its surroundings on Saturday.

He said some municipal employees and women volunteers also helped in the clean-up.