Going to Manila or overseas, will just be an option 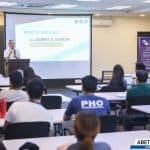 Going to Manila or overseas, will just be an option

In his message during the launch of the Sangguniang Kabataan Youth Profiling Project at The Bunker yesterday, June 21 Governor Abet Garcia highlighted the developments that will happen in the province and the opportunities it will bring especially in job generation.

Aligning the program to the province’s vision of attaining the highest Human Development Index (HDI) in the Philippines, the Bataan Youth Development Office added questionnaires that would specifically distinguish the needs of youth in terms of health, education, and economic development.

The Governor also encouraged the youth sector in Bataan to support the program as this will assist the government to respond to the needs of the ‘future leaders’ of this province.

The post Going to Manila or overseas, will just be an option appeared first on 1Bataan.