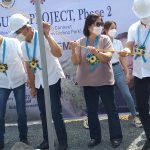 Sen. Richard J. Gordon described as visionary the leadership of Bataan Gov. Albert Garcia, Congressman Jose Enrique S. Garcia III and Hermosa Mayor Jopet Inton for having established the Freeport Area of Bataan (FAB) and the about to be constructed road links in Hermosa town.

Gordon who graced the groundbreaking ceremonies last Saturday of P5 billion Hermosa Mega Build Project (Phase 1) said the Garcias and Inton had envisioned the future of Bataan and Zambales and the adjacent Clark in Pampanga. This project, Mabiga-Morong-Subic Port Road will connect Hermosa Ecozone, Clark International Airport and the Bataan Technology Park. Gordon is well-loved by Bataan folks for having taken the cudgels for the province when he defended in the Senate and House of Representatives the establishment of Freeport Area of Bataan. “I told them what is good for Bataan is good for the country,” he said. He also said, “Pag ang ginagawa niyo ay para sa bayan hindi kayo makakalimutan ng tao.”

Gordon lauded Bataan for having the first export processing zone in the country. He was referring to the former Bataan Export Processing Zone which had become a ghost town following the pull out of many investors due to wide spread labor dispute. “Nung dumating ang mga Garcia siga ang Mariveles dahil itinayo ang FAB,” he said.