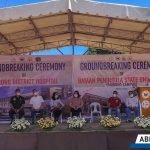 March 23, 2022 - In News By Jhonder Salazar Martinez Comment off

Gov. Albert Garcia led yesterday, March 22, the groundbreaking ceremony and laying of time capsule for the Morong District Hospital, the first hospital in the Municipality, and the Bataan Peninsula State University (BPSU) – Morong Campus, the seventh campus of BPSU; both are located in Barangay Sabang.

BPSU-Morong Campus, seen to be the center for Tourism and for Agroforestry of the College of Agriculture, will give Bataan a higher population of professionals; while the Morong District Hospital will provide health equity not only in the said municipality but also in its neighboring communities for it will give the residents easier access to healthcare services.