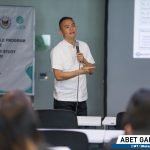 For its long-term goal of making Bataan a carbon-neutral province, the Provincial Government of Bataan, with the aforementioned stakeholders, has conducted a study for the e-jeepney routes of Balanga to Dinalupihan, Balanga to Lamao and the E-bus route of Balanga to Mariveles.

While the discussion on maintenance and establishment of charging stations are still going on, Gov. Abet expressed that the Provincial Government will tap financial institutions and other sources of funds as this endeavor is necessary in line with the ongoing challenge of climate change.

During the meeting, stakeholders are eyeing the long-term implementation of E-PUVs on our roads in such a way that operators and drivers will still benefit as we transition into a sustainable transport system.