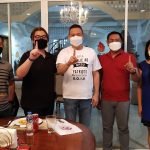 In its bid to strengthen the Bachelor of Public Administration (BPA) program under the College of Business and Accountancy of Bataan Peninsula State University – Balanga Campus (BPSU-BC), last December 16, faculty members of the BPA program had a meeting with Gov. Abet Garcia to discuss ways and means to further improve said program. One of which is by establishing links and exposing students to best practices being implemented at the Provincial Government of Bataan (PGB).

Future collaborations, research and extension, and institutionalization of programs and activities of BPA program were also tackled. Corollary to this development, a memorandum of agreement between the PGB and BPSU is being drafted.
Moreover, it is envisioned that BPSU will become a center for public administration and governance in the region, and eventually in the whole country.

With report from Ernesto Saclao