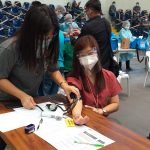 Bataan Gov. Albert S. Garcia profusely expressed his gratitude to doctors, nurses, and other frontliners who worked hard during the height of COVID-19 pandemic as he announced during Monday’s flag raising ceremony that the province will be under Alert Level 1 starting March 1, 2022.

The post Gov. Abet thanks frontliners appeared first on 1Bataan.