Gov. Abet: We face challenges in the next 3 years 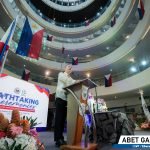 Gov. Abet: We face challenges in the next 3 years

Bataan Gov. Albert S. Garcia bared during his valedictory address on Wednesday that the provincial government in particular and the nation in general is facing challenges brought about by inflation.

Garcia who took his oath of office before Executive Judge Marion Jacqueline P. Poblete as incoming congressman of Bataan Second District, however, expressed optimism that Bataan can handle the challenging situation because of the new administration under newly-elected President Ferdinand “Bongbong” Marcos, Jr. and Vice President Sara Duterte both have trust and confidence in his leadership.

One of Gov. Abet’s important legacies is the construction of “The Bunker” which houses different national and provincial government agencies to promote the One-Stop-Shop scheme to ease up business transaction among clients.

He explained that the Bunker does not only symbolize the heroism of Filipino soldiers who fought for freedom and democracy. It also stands for unity and strength to render public service to our fellow Bataenos and give us all a good quality of life.

The post Gov. Abet: We face challenges in the next 3 years appeared first on 1Bataan.