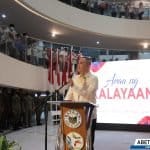 Bataan Gov. Albert Garcia extolled the war veterans, frontliners and the men and women in uniform who had been doing their best during the pandemic due to COVID-19 in yesterday’s commemoration of our 124th Independence Day.

In his brief but meaningful remark, the Governor who was recently elected congressman of the province’s second district, said the frontliners– doctors, nurses, and medical workers– must have drawn inspiration from the country’s national heroes who sacrificed for their countrymen.

Garcia urged everyone to emulate the traits shown “by our heroes to achieve independence.”

“Now that the pandemic is almost over, let us continue to draw inspiration from our heroes to serve the people,” said the Governor.

The Independence Day rites held at the Bunker was attended by members of the Sangguniang Panlalawigan led by Vice Gov. Cris Garcia, town mayors, Capitol employees and representatives of government and non-government organizations.