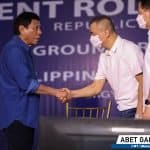 Garcia, newly-elected representative of Bataan Second District, said he is very thankful to President Duterte under whose term various infrastructure projects were implemented.

In his welcome speech, the outgoing provincial executive likewise thanked Sen. Bong Go for the Malasakit Centers established in the province.

The PSTC is going to be nestled on a 250,000 -square meter panoramic lot donated by the provincial government to the Philippine Sports Commission.

On May 18, 2021, the province of Bataan through Gov. Garcia, donated land to the PSC for this purpose. The PSC was represented by Chairman William Ramirez in the signing ceremony.

The post Gov. Garcia thanks PRRD appeared first on 1Bataan.