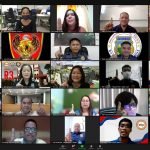 Garcia who had been the RDC chair for the last three years, presided over the 11th Full Council meeting of Central Luzon Regional Development Council III held at the regional office of National Economic Development Authority (NEDA).

It was attended by CL governors as well as representatives from the six provinces and several cities.

Garcia assured the RDC officers and members that he will still continue to make himself of service to council to push development projects in the region.