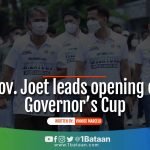 Governor Joet Garcia, officially opened the Governor’s Cup: Intertown Sports League 2022 last Saturday, October 22, at the newly-renovated Bataan People’s Center (BPC). Said event is part of the campaigns of the PGB to encourage Bataeños to get their vaccination booster shots as only those with booster shots can watch the game live.

The Saturday morning event started with a Holy Mass followed by a parade from Plaza Mayor de Balanga going to the capitol compound, attended by officials of the Provincial Government, 11 municipalities and lone city together with their respective basketball and volleyball players. Five barangays who have already completed their Barangay Master Development Plans received service vehicles from Gov. Joet as his continuing program ever since he was still in Congress.

This was followed by the ribbon cutting and blessing of the Bataan People’s Center which has undergone renovations during the past months including the installation of solar panels for this infrastructure.

In his message, Gov. Joet emphasized that the new mission and vision of the province can only be achieved if each Bataeño family is strengthened as he believes that a strong and resilient family is the foundation of a society. Officially opening the Governor’s Cup were the mayors and SK Presidents of each town along with Governor Joet Garcia and SK Provincial Federation President Precious Manuel. For those who still have not received their booster shots, live broadcast of the games can be viewed at Sangguniang Kabataan – Bataan facebook page.