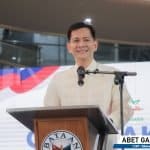 “Just imagine a province where all families, through our parents, are aligned and synchronized with our vision of improving the quality of life,” Governor Jose Enrique ‘Joet’ Garcia III said as he highlighted the importance of unity which is the ideology of 1Bataan during the oathtaking ceremonies of elected local officials of the Province of Bataan at the Bunker today, June 29.

Gov. Joet also emphasized that in working in unison towards one vision, data through the Community-Based Monitoring System (CBMS) is vital in understanding the needs of the people and creating programs that would appropriately address these needs.

During the event, outgoing Governor Abet Garcia passed on the seal and flag of the Provincial Government of Bataan, along with a miniature of The Bunker and the documents of the province for the last three years.