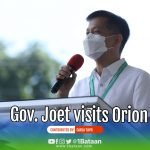 To continuously coordinate and prepare for the launching of Bisita Bayan kada Buwan program in 2023, Governor Joet Garcia paid a visit to the Municipality of Orion last October 24. Gov. Joet joined the flag raising ceremony where he had the opportunity to convey the reasons for the visit as well as the plans for the municipality in the coming months.

A breakout session was held at the Sangguniang Bayan hall attended by Vice Gov. Cris Garcia, Vice Mayor Rj Fuster, members of the Sangguniang Panlalawigan and Sangguniang Bayan Meetings were also held at the Orion MDRRM Building where Gov. Joet Garcia and Mayor Tony Pep Raymundo met with the Councilors, Punong Barangays, and Sectoral Representatives to further assess the needs of the residents in various services and concerns.

Gov. Joet emphasized that the support of the community will play a pivotal role in making government programs effective, especially the Community-Based Monitoring System (CBMS), which is a key to more efficient social services delivery and implementation of the Universal Health Care Law.

In his meeting with representatives of Civil Society Organizations, the good governor highlighted the need for more members to receive their COVID-19 vaccine booster shots in line with the continuous fight against Covid-19.

Gov. Joet also underscored that the various programs and services will make it more feasible for Bataeños and the government to work in unison towards its new vision of ensuring stable and empowered families in the Province.