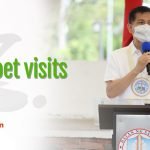 September 20, 2022 - In News By Maria Vinnise Marcelo Comment off

In consonance to the Provincial Government of Bataan’s aim to cascade and make its programs and services more accessible to the people, Bataan Governor Joet Garcia visited the municipality of Samal yesterday, September 19.

After joining the flag-raising ceremony, a breakout session was held where department heads from the provincial government met with their counterparts in the local government unit and identified the challenges faced by the people in availing the services they offer.

The hardworking governor met with Mayor Alex Acuzar and the members of the Sangguniang Bayan led by Vice Mayor Ronnie Ortiguerra and discussed ordinances that need effective implementation in the locality, especially in poverty alleviation. During the meeting, he emphasized how working in unison would mean efficiency in delivering better public service for Bataeños.

In his meeting with the Punong Barangays of the municipality and representatives of different civil society organizations, later in the day, he asked for their support in encouraging their constituents and members to receive the anti-COVID-19 vaccine booster shot, answer the Community-Based Monitoring System (CBMS), and join the Educhild Parenting Program.

In endorsing the opportunities laid out by the Universal Health Care Law, he highlighted that everyone is now required to be registered with PhilHealth. The recently launched PhilHealth Konsulta Program entitles every Filipino to undergo free consultation with some laboratory tests and medicines subsidized if required by the physician.