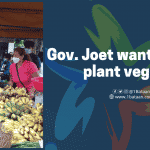 Bataan Governor Joet Garcia urged members of the Bataan Provincial Police Office to plant vegetables and even fruits in vacant lots to replenish the food supply amidst rising prices of prime commodities.

The Governor made the appeal in his speech during the culmination of 27th Police Community Relations Month at Camp Tolentino PNP headquarters last weekend.

He explained that when he was city mayor, the city government propagated the “Kaanib” program wherein every barangay had put up gardens planted with various vegetables for local residents’ consumption.