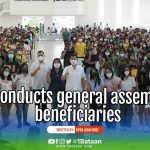 During the event, Gov. Jose Enrique S. Garcia III led the oath-taking of the newly-elected officers of the Iskolar ng Bataan Association Provincial Level. Said association aims to help in disseminating INB’s programs as well as assist in attending to simple queries and concerns.

Gov. Joet Garcia took this opportunity to ask the support and cooperation of the beneficiaries to the following programs: 1) Answering the CBMS survey under R.A. 11315; 2) Registering their parents online in PhilHealth’s Konsulta Package under the Universal Health Care (UHC) Law; and 3) Using digital payment for transactions even on merchants to become a “cashless” city or province.