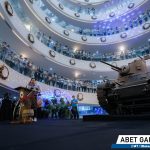 Presidential aspirant Manila Mayor Isko Moreno admired the magnificence of “The Bunker,” the provincial capitol building of Bataan. He said the structure which houses the provincial government agencies and two commercial banks is comparable enough to government halls in Metro Manila.

The post Isko admires ‘The Bunker’ appeared first on 1Bataan.