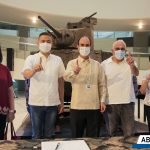 March 3, 2022 - In News By Maria Vinnise Marcelo Comment off

Israeli Ambassador to the Philippines His Excellency Ilan Fluss visited the Province of Bataan on March 3 starting in the town of Dinalupihan where the 1Bataan Agri-Inno Tech Corp., a Public-Private Partnership project of the Provincial Government with Agrilever Israel is situated.

Dinalupihan Mayor Gila Garcia, Agrilever Chairman Yoav Schwalb presented the outcome of the first 10 pilot farms of the project where fruits of their labor are very promising compared to the harvests of a farmer who uses the traditional way of planting high-value crops.

“As an ambassador, we will be happy to see what we can facilitate and help in this time. Please see us, the Israeli embassy – a partner and we will try to help within our capacity and what we can do. It is the message of my visit here today,” H. E. Ilan Fluss said after the presentation.

H. E. Ilan Fluss also visited one of the AITC farms and the site for the Mega Drip Irrigation Project in Dinalupihan. After this, the delegation, together with Gov. Abet Garcia proceeded to Brgy. Calaylayan in Abucay where a simple groundbreaking ceremony was held for the 1Bataan Post-Harvest Center. With a budget allocation of P285M said center will serve as a storage facility for the harvests of AITC farmers to have a longer shelf life in preparation for distribution to partner markets.

Gov. Abet also took the opportunity to show Ambassador Fluss the new seat of government of the Provincial Government of Bataan, The Bunker, which is also a PPP project.