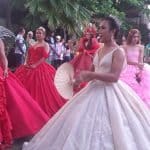 Members of lesbian, gay, bisexual, transgender and queer (LGBTQ) community in Hermosa get good acceptance from the municipal government and are thankful to Mayor Jopet Inton for the fair treatment.

As a way of expressing its appreciation for its existence in the community, the municipal government, through the municipal tourism office recently held a “santacruzan” featuring LGBTQ members from the town’s 23 barangays.

Organized by Clement Percival Penaflor, municipal tourism officer, the event was held last June 12 as a highlight of 124th commemoration of Philippine Independence Day. “It also coincides with June as “Pride Month, Bongga Ka Day event,” said Penaflor. The occasion drew crowd from the community and local residents. The members aged 18 to 53 earnestly joined the “Santacruzan” saying they were very proud of themselves and Hermosa town.

They were grateful to the municipal government for sponsoring the said activity which portrays the sense of acceptance and appreciation of the “third sex” individuals who Penaflor said “there are many of them” not only in Hermosa but in other towns as well.

The post LGBTQ community gets good treatment from Hermosa appeared first on 1Bataan.