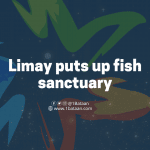 The Municipal Government of Limay is now all set to put up fish sanctuary to replenish the depleting volume of fish catch in that part of the province.

David said there is now a pressing need to establish fish sanctuary to protect the interest of several thousands of fishermen not only in Limay but also those in the neighboring municipalities.

The fish sanctuary is necessary to allow marine species to freely reproduce and multiply more easily leading to faster turnover of fish from the reserve to non-reserve.

Limay is host to Petron Bataan Refinery, the only oil refinery plant in the country.