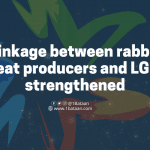 Strengthening the linkage between rabbit meat producers and processors and local government units is seen to boost the industry in the province.

Concepcion was oriented on the initiatives of the association to improve rabbit meat industry in the province. Rabbit dishes were presented to him and other municipal personnel for free taste.

BARMPP has also paid a courtesy visit to Samal Mayor Alex Acuzar with the latter assuring support to the association two weeks ago. Paguia also disclosed that the mayor wants the first slaughter house for rabbit meat be established in Samal.

More than a month ago, Paguia and BARMPP also brought rabbit meals to the Office of the Governor and the Sangguniang Panlalawigan.

The Provincial Government of Bataan through the Office of the Provincial Veterinarian has funded a research study in tie up with the BPSU VRET and BARMPP to improve rabbit meat production.

BARMPP officers thanked various government agencies and expressed excitement to do future collaborations to advance rabbit meat industry. BPSU and BARMPP are promoting to the consuming public the high nutrient and affordability of rabbit meat.