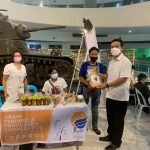 Bataan First District Board Member Benjie Serrano urged local residents to patronize products made in the province as well help in promoting them.

As Chairman of the Committee of Trade and Industry, Serrano is fully supporting local businessmen and the development of Bataan products.