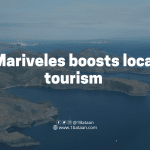 The new set of leaders in Mariveles headed by Mayor AJ Concepcion is aiming to boost local tourism. According to Vice Mayor Lito Rubia, who presides over the Sangguniang Bayan, the mayor is keen in mapping out plans to improve local tourism. In a recent SB committee meeting headed by Councilor Susan Madla Murillo, chairman of the Committe on Tourism, revising the Mariveles Tourism Code was discussed to suit the present time and needs. During the meeting, committee members realized there is already a need to create a municipal department for tourism with plantilla positions. The Mariveles SB led by Rubia vowed to support the mayor in boosting local tourism. Members of the SB Committee on Tourism agreed to bring their suggestions to Concepion for inclusion to the master plan to bolster tourism. The committee meeting was attended by Councilor Ivan Ricafrente, Councilor Omar Cornejo, Councilor Vennacio Villapando, and Almario Rubia.