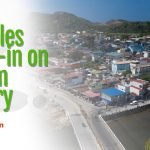 Mariveles, an industrial town in the southernmost part of Bataan, is zeroing-in on tourism industry.

Mariveles Mayor Ace Jello Concepcion in his recent Facebook page, said he and his department heads met with Arch. Earl Anthony Lingad, a museum researcher and the staff of the cultural and heritage division of Bataan, to discuss the plans.

Concepcion wants to preserve and put in its proper perspective historic sites like Kilometer 0 Marker to regain respect and historic value.

Concepcion also plans to put up additional historical structures to attract foreign and local tourists with emphasis on World War II historical events and how Mariveles survived the momentous event.