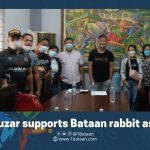 Bataan Peninsula State University (BPSU) Vice President for Research Extension and Training Services ((VRET) Dr. Hermogenes Paguia and BARMPP officers led by its president Elton Salenga on Wednesday paid courtesy a visit to Acuzar and oriented the latter on the initiatives of the association to improve rabbit meat industry in the province.

BARMPP told the neophyte mayor that they are promoting to the consuming public the high nutrient and affordability of rabbit meat. The association, echoing the Department of Agriculture said that rabbit meat is an affordable source of protein.

During said visit, different rabbit dishes were presented to the mayor and other personnel of the LGU for free taste.

BARMPP sought support from LGU Samal to adopt rabbit raising as a livelihood enterprise in the municipality.

Responding positively, Acuzar vowed to support BARMPP in its future undertakings not just in Samal.

The mayor will provide counterpart fund for three days training organized by VPRET of BPSU for 15 members of the association to Bureau of Animal Industry.

Animal Production and Development Center, Marulas, Valenzuela on slaughtering, meat handling and processing scheduled July 26- 28. BARMPP president Salenga is a resident of Samal. His wife is the association secretary.

VRET staff Maricel Javier said the association’s address based on its registration at DOLE is Samal.