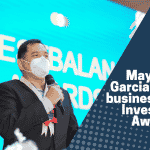 Mayor Garcia said that this is the first collaboration of CEDO headed by Mr. Edmer Fabian and the Provincial Cooperative Enterprise and Development Office (PCEDO) headed by Ms. Zena Sugatain, that will further promote and strengthen our 1Bataan team among business communities.

To further inspire the audience, Gov. Joet mentioned the Expansion of the Freeport Area of Bataan, a law he pushed in Congress that is why, the Freeport Area of Bataan has now expanded to the Woodlands Industrial zone in Dinalupihan, City of Balanga at the Capitol and the Harbor City in Pilar town, the government arsenal in Limay, as the First Defense Economic Zone in the country, which are continuously attracting investors and locators, giving much needed employment opportunities for our people.

Lastly, Gov Joet Garcia said that a lot of projects are still in the pipeline like those of the transport group, the possibility of shifting to electric vehicles with solar charging station which will lessen transport fare as well as cashless transactions thru digital payments to ensure faster and worldwide transactions.