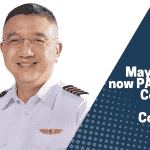 Besides being a good public servant as the chief executive of the now progressive Municipality of Hermosa, Bataan, Mayor and licensed pilot Antonio Joseph “Jopet” R. Inton is now one of the Captains of the Philippine Air Force Reserve Command.

“This day is significant and historic for me as a public servant because today is our Donning of Ranks as Captain of the 23rd Air Force Group Reserve and 2nd Air Force Wing Reserve of the Philippine Air Force. Our position is Squadron Commander,” Mayor Inton said via his Facebook Page.

The recent ceremony was led by Brigadier General Ramon Guiang of the Philippine Air Force, the Commander of the Air Force Reserve Command, and also his “Mistah” in Philippine Military Academy (PMA) Sambisig Class ’91 at Clark Air Base in Pampanga.

Commanding Officer of the 2nd ARCEN LTC Maribelle Manangbao, other officers and staff of the 2nd Air Reserve Center also graced the event including Inton’s other Mistah, General George Blanco of the 355th Aviation Engineer Wing.

The mayor said, “it is a great honor to join and be part of the Air Force as Squadron Commander!”

Being a PAF Reservist has its mission to organize, train, equip, develop and administer the Philippine Air Force reserve force as base expansion in the event of war, invasion, rebellion, disasters, or calamities. They are also tasked with augmenting the regular force whenever needed.