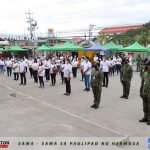 Hermosa Mayor Antonio Joseph “Jopet” R. Inton led the short program and wreath laying at the Rizal monument in Hermosa town plaza. The commemoration is themed: “Rizal: For Science, Truth and Life.”
“The local government of Hermosa joins in by offering flowers with your servant in commemoration on this day to appreciate and refresh the heroism done by our national hero,” said Mayor Inton.

The annual event was also attended by several councilors, school principals, policemen, Hermosa marshal and department heads of the municipal government.
“We salute Gat Jose Rizal for his bravery and contribution to the freedom of our country. A tribute to his heroism!,” Inton added.