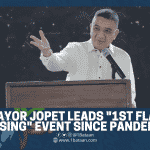 Mayor Jopet was joined by fellow newly-elected and reelected “Lingkod Bayans” of Hermosa, including the department heads and staff of the Local Government of Hermosa.

In his speech, Mayor Inton tackled pushing for the continuous development projects in infrastructure, investments, agriculture and other programs that will further raise the level and continuous growth of the Municipality’s economy.

Before this, they have also attended a simple Thanksgiving Mass for the newly-elected officials officiated by the town’s Parish Priest Fr. Tony Quintos at the Saint Peter of Verona Parish Church.