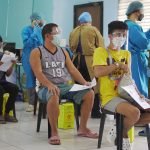 Raymundo said at least 85 percent of the town’s population received their first dose of Sinovac and Sinopharm anti-COVID-19 vaccines.

Raymundo was surprised to learn that the number of residents who received immunization exceeded the total number of population. It turned out that thousands of workers had themselves vaccinated in Orion even if they were non-residents but working in several firms there.