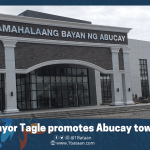 Newly-elected Abucay town Mayor Robin Tagle is trying his best to promote his own municipality as a tourism destination in Central Luzon if not in the whole country by exploring possible tourist spots.

The former vice mayor who won handily against former mayor Liberato Santiago, Jr, in his FB page posted recently in Pilipino “Alam Nyo Ba?” (Did You Know That…?) where he said that the Philippine Atmospheric, Geophysical, and Astronomical Services Administration (PAGASA) has an office at the compound of Bataan Peninsula State University Abucay compound.

He also said the Real-Time Monitoring System is likewise located in Abucay. “It monitors correct and comprehensive details of earthquake and tsunami that may occur anywhere else in the country,” explains the mayor.”Tunay na ligtas ang ating lalawigan sa pamamagitan ng mga ahensiyang ito,” Tagle added.

Abucay, a third class municipality, is a coastal town with roughly 43,000 population.