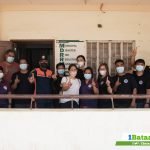 The Metro Bataan Development Authority (MBDA) in partnership with the local government of Pilar, Philippine National Police (PNP), and Bureau of Fire Protection (BFP) conducted yesterday, May 17, a simulation exercise on rescue and emergency response at Ala-uli, Pilar.

The purpose of the said simulation exercise is to ensure that all agencies and offices assigned for emergency incidents, especially road incidents are prepared.

At exactly 10 o’clock in the morning, simulation started and the area was cleared within 27 minutes. The simulation scenarios were vehicular accidents and robbery.

According to the Pilar Municipal Disaster Risk Reduction Office (MDDRMO), it was a successful simulation exercise though communication among agencies involved can still be improved.