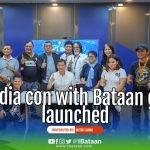 The first “Kapihan with Gov. Joet” was recently held marking the launching of regular media conference with the good governor. “Tignan natin once a month, kapag alanganin sa second month yung kapihan natin”, the governor told newsmen who attended the press briefing held at The Bunker.

Garcia said he recognizes the role of mainstream media in informing the public of the programs and projects of the provincial government, or any information needed to be disseminated.

Updates of the governor during the media conference included Outbound Trade and Investment Mission in Korea, Launching of 4K Bamboohay in Abucay, 12 Prizes for 12 Days of Christmas, and Hataw Takbo in Balanga. The governor also gave updates on BNPP issue, Penelco, Blockchain Technology, MICE Tourism, Students Lunch Program, AFAB citation, BIsita Bayan, and Bataan as Bali of the Philippines, among others.

Garcia, a busy and hardworking governor, has always something to update Bataan folks. Well informed public is necessary to achieve progress, he summed.