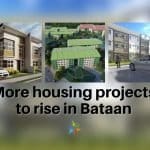 The Provincial Government of Bataan and the local chief executives of Orani, Pilar, Limay, Mariveles, and City of Balanga signed a Memorandum of Agreement with the Department of Human Settlement and Urban Development represented by Assistant Secretary Daryll Bryan Villanueva on Monday, June 27, for the land development of 1Bataan Villages in the above-mentioned municipalities and city.

According to Governor Abet, this is one of the ways to reduce Bataan’s carbon footprint as schools, sources of livelihood, and markets are near their homes.

In its commitment to provide opportunities to families as they continue to provide homes, a DHSUD marker was unveiled in Orion while a ribbon-cutting ceremony of the DHSUD office took place at the 3rd floor of The Bunker in Balanga City.

The post More housing projects to rise in Bataan appeared first on 1Bataan.