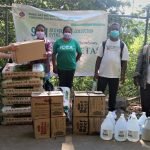 A total of 159 households belonging to the Magbukon Ayta community in Morong, Bataan received P23,000 worth of goods from the proceeds of a recycling project initiated by the Subic Bay Metropolitan Authority (SBMA) through its Ecology Center.

SBMA Chairman and Administrator Wilma T. Eisma said the donation included 15 sacks of premium rice, four boxes of instant noodles, 80 cans of corned beef, 30 1,500-piece boxes of face mask, and 10 gallons of isopropyl alcohol—items that were specifically requested by the Ayta tribe.
These were turned over recently by SBMA representatives at the remote sitio of Kanawan in Barangay Mabayo, and received by Magbukon Ayta Tribal Council chief Berlinda Restum and other Ayta leaders.
Eisma said the donation was funded by proceeds from recyclable materials sold in the 9th SBMA Recyclables Collection Event (RCE) held last June.

The bi-annual SBMA recycling project allows Subic Bay Freeport stakeholders to sell recyclable materials and, as an option, donate the proceeds to underprivileged sectors of the Freeport community.
“By participating in our Recyclable Collection Event, residents and business establishments in the Subic Bay Freeport are able to address their waste problem, turn recyclables into cash, and at the same time, help members of the community who are in need,” Eisma said.
“The Kanawan Aytas are the latest beneficiaries of this recycling drive that has been transformed into another CSR project of the SBMA,” she added.

SBMA Ecology Center manager Amethya Dela Llana said the RCE was initiated in October 2016 and the project had since been conducted twice a year, except last year when the Covid-19 pandemic struck.
The second RCE this year was launched today and will last until Friday with a series of online lectures on waste management and environmental protection, a “refill revolution” project where detergents and other cleaning materials will be sold at bazaar prices to those who bring their own containers, and a junk art contest that aims to promote upcycling among the youth.

Through the RCE project, Dela Llana added, owners of recyclables have the option to take the earnings from the sale or donate them in whole or in part to beneficiaries like the ABS-CBN’s Bantay Kalikasan, which help in promoting environmental protection.
Among the waste materials collected during the RCEs are plastic bottles and cardboard, busted florescent bulbs, used oil, used lead acid batteries, empty ink cartridges, and wastes from electronics and electrical equipment.

Dela Llana said those that have benefited from RCE proceeds included the SBMA Employees Association, which received P40,000 as additional Covid-19 fund from the 7th RCE; and Happy Paws, which got P23,000 from the 8th RCE to fund temporary shelter for stray dogs and cats in the Subic Bay Freeport and Olongapo City.