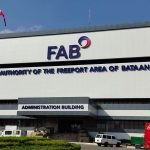 Pineda disclosed during the “Kapihan sa AFAB” on Tuesday that the freeport has been adjudged one of the efficient vaccination centers in the region if not in the whole country. “We were able to allocate enough funds for vaccination of our employees and factory workers,” he said.

FAB has more or less 40,000 workers most of whom were affected by the pandemic. For those workers who are still unvaccinated, the AFAB had been conducting regular testing for them, Pineda explained.
He assured that in case of new surge in Covif-19 cases in FAB “hindi na ganun ka grabe dahil marami na tayong workers na nabakunahan na.”

The post Most of FAB workers fully vaxed– Pineda appeared first on 1Bataan.