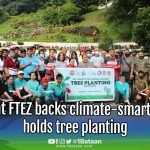 The initiative is also under the Department of Environment and Natural Resources’ (DENR) National Greening Program and the National Climate Change Action Plan (NCCAP), which aims to promote environmental stability, biodiversity conservation and enhancement of climate change mitigation.

Over 400 seedlings of pine trees were planted by the participants from DENR-CAR, PNP-Bataan, Army Reservists of 305th Ready Reserve Infantry Battalion, TIEZA and PVAO.

“This is in line with the recommendation of the Mt. Samat FTEZ’s Comprehensive Tourism Master Plan to promote the development of the heritage and national park while harnessing its ecological potentials and focusing on the measures aligned with risk reduction plans and climate change adaptation of the NCCAP,” said TIEZA – Mt. Samat FTEZ Administrator Francis Theodore Initorio.

Moreover, the tree planting supports the Mt. Samat FTEZ’s proposal for the development of mini parks at the Shrine’s Zigzag footpath. Hundreds of pine trees will be planted during the said activity.

In line with the mandate of the national government to promote the sustainable development of tourist spots in the country, especially the cultural and heritage sites, the Mt. Samat Shrine of Valor was officially designated as FTEZ on February 27, 2017 through Tieza. It also resulted from the inter-agency partnership of the TIEZA, the Provincial Government of Bataan and Municipal Government of Pilar, and the PVAO.