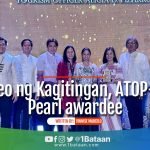 The Museo ng Kagitingan in Pilar was recognized by the Association of Tourism Officers of the Philippines – Department of Tourism (ATOP – DOT) Pearl Awards after bagging the 2nd runner-up in Best Tourism Interpretation Category.

“This new search for the ATOP Pearl Award for the period 2019-2020, “Best Tourism Interpretation” is very timely for us to showcase the first LGU-run museum in the province. The museum project is very dear and personal to me, as I was the local chief executive of Pilar during the time that it was constructed, owing its establishment to the people of Pilar, who really were instrumental for such.” Provincial Tourism Officer Alice Pizarro said in an online interview. ATOP-DOT is an annual system of recognition which aims to recognize the efforts of local government units in the tourism industry.

“ This is a testament to the people’s generosity and support for the preservation of their identity and pride of place; the very essence of tourism; thus, care and maintenance of the museum should be given premium.

Kagitingan Museum is a product of the people’s participation, generous hearts and diverse talents of the people of Pilar that could be replicated in the whole of Bataan,” Pizarro added.

Located beside the Nuestra Senora del Pilar Church in Brgy. Poblacion, the Museo ng Kagitingan was established on April 10, 2019 to house the remnants of the second world war as the town aspires to be a historical-cultural hub in the province.