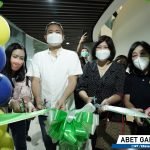 December 2, 2021 - In News By Maria Vinnise Marcelo Comment off

Confident in his belief that economic activity in Bataan will be more vibrant, he also said that Micro, Small, and Medium Enterprises (MSMEs) account for 90% of the business sector which the Negosyo Center can assist in increasing brand awareness and in market matching.
“Itong 1Bataan Negosyo Center is one of the reasons why our province is the most business-friendly province sa buong Pilipinas,” he added as he reiterated that ease of doing business is an area where the province is known for.

After the program, the Galing! Bataan trade fair was opened where locally-accredited products of MSMEs are showcased on the ground floor of The Bunker which will be open until December 3.
Gov. Garcia expressed his gratitude to the different government agencies who made the center a possibility especially to the Department of Trade and Industry and the Provincial Cooperative and Enterprise Development Office (PCEDO).