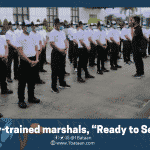 The first batch of newly-trained marshals who has undergone proper training will be immediately deployed by LGU-Abucay all over the town to maintain order and serve its citizens.

According to Abucay Mayor Robin Tagle, he wants to make sure that the new marshals are disciplined, firm, fair and most of all obedient to proper law enforcement.

However, Tagle said that any abuse or violation of duty by the deployed Abucay Marshals should be reported to him and will be punished accordingly.

“Thanks to our Lt. Col. Decada as the chief trainer, he ensured that everyone would receive fair knowledge and will not just act alone for themselves but united. I am confident that the new marshals will be able to fulfill their duties, obligations and responsibilities especially during the time that they are on duty, ” Mayor Tagle said.