NHA gets a key! 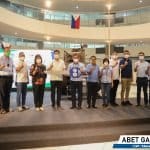 NHA gets a key!

“My heart is jumping in joy because, for the past years, I keep turning over keys to the beneficiaries and this is the first time that NHA gets a key. This is a manifestation of the generosity of the province of Bataan,” National Housing Authority General Manager Marcelino Escalada Jr. said during the ceremonial turnover of key for the NHA Satellite Office located at the 2nd floor of The Bunker today, June 28.

NHA has funded and turned over fully-furnished housing units in 1Bataan Villages in Mariveles, Orion, and Balanga City and has been prioritizing housing projects for those affected by the mandamus for the rehabilitation of Manila Bay.

“A little twist and tweak with the designs would mean a lot. Compared to the housing units provided by the NHA to where they came from, this is a lot better,” he stressed as he explains that Informal Settler Families are more willing to stay in the resettlement areas now that each housing unit is ready for move-in.

“I don’t care if we have less production but we should have the highest number of occupancies,” he added.

Prior to the ribbon-cutting ceremony of the NHA office, GM Escalada visited the 1Bataan Village-Orion, 1Bataan Village-Balanga and the AFP/PNP and government employees’ housing project in the same city.

GM Escalada thanked the Provincial Government of Bataan and assured them, “as our president-elect BBM [Bong Bong Marcos] promised to support NHA projects, we will never forget Bataan.”

The post NHA gets a key! appeared first on 1Bataan.